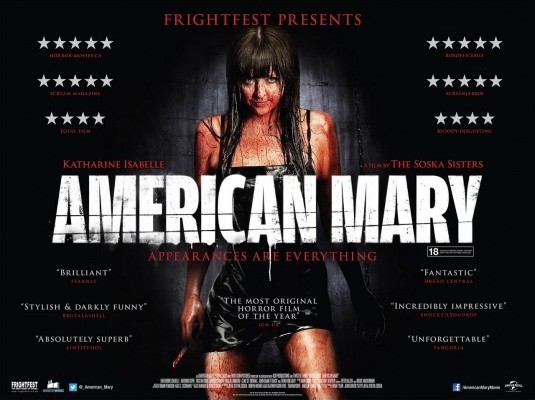 Every now and again you’ll get a film come along which while you’re watching you keep thinking… “Wow this is pretty bad” BUT you won’t stop watching it, you’ll ignore everything else going on around you and you’ll very likely watch it again. This is one of those films, and I’m really glad I just re-watched it! In a nut shell the makeup is absolutely terrible (especially the cosmetic surgery parts), the acting has 2 extremes depending on the character (really lazy at one end and crazy over the top at the other) and you constantly want there to be more death! Also you go through most of the film wondering why it’s called American Mary when her nickname turns in to Bloody Mary. It’s not even like there ever seem to be references to places (that I can remember) to say that this is “Mary… You know the American girl at our Canadian university.”

For our Sunday Night Slashers segment this is our first time looking at a Body Horror movie, although I have reviewed a similar sort of premise before which delves in to the body modification sub-culture when Richard Brake went a bit cutty pokey crazy with Perfect Skin. But that film I looked at more as a thriller, whereas the graphic nature of American Mary definitely sends it a bit further down the Body Horror road. Don’t get me wrong though, as uncomfortable as it is, I think it’s still relatively accessible and certainly feels like Hollywood horror for the masses rather than grind house revenge flick.

Essentially what this boils down to is a little harmless body modification fun to help pay the bills to diving face first down the rabbit hole as it very quickly because a revenge movie as she snaps following her rape at a sex party hosted by the doctors who are meant to be teaching them. That scene, I have to say is perhaps not the most graphic which has been committed to screen but it’s still pretty disturbing and probably some of the most realistic and convincing acting in the film.

I feel like I should probably elaborate on the acting a little because the over the top crazy character is of course Beatress who wants to look like Betty Boop and is played really well by Tristan Risk. I think her scatty, squeaky, 100 mph personality and acting styled worked so perfectly for the character and the the film as a whole… It actually helped to off-set that terrible makeup job which they did on her. I understand that it is meant to be over the top and show how cosmetic surgery can transform someone in to something far from realistic, but they didn’t do a great job with her. HOWEVER I think they did an even worse job with Ruby RealGirl played by Paula Lindberg who played the character in a very naive way, which again seemed to work really well, but the makeup was so loose and literally baggy in placed that she just looked absolutely bizarre.

So they did a good job, whilst Twan Holliday who plays bodyguard Lance, who acts him in a way which just makes you fall in love with this giant brute and Antonio Cupo plays Billy the strip club owner as the horrible sleazy scumbag you imagine he would be… Now his acting is terrible, but it suits the character and style of film… So far so bad… by which I mean good… You know what I mean. At this point it still feels like grass roots cheap horror acting.

Then there is Katherine Isabelle as Bloody Mary. This is where I feel like the acting some times feels a little lazy – partly because it rarely feels over the top or badly acted… She stands out in the film as seeming like a better actress, or at least trying harder than the others, but equally because of that, when she has a definite and palpable personality change after the sex party (and that’s what you would expect), it makes it feel like her apathy as a character is partially bored acting… Only because I don’t feel like the character remains constant. I do love that they snap her character as her spirit breaks – I think it’s very powerful and incredibly realistic, I just don’t think it is executed in quite the right way.

I know it’s going to sound crazy but I think what the role of Mary was missing was that the acting could have been a bit worse… intentionally bad, to fit in better with the rest of the cast.

All in all though its an original concept, its pretty well executed and above all, because that’s what you want from a decent horror flick is that it’s good fun! I did actually thoroughly enjoy it – I think this 2012 movie is due a remake though with much more graphic violence and more body modification footage (which by the way was terribly inaccurate – if you ever see footage of someone actually getting head implants done it is far more brutal than anything you’ll see in this film!)… I’m sure they could have actually suspended someone for the storage unit scene for example.

Give it a go – I think you’ll enjoy it if you like to wince at what people put their bodies through.