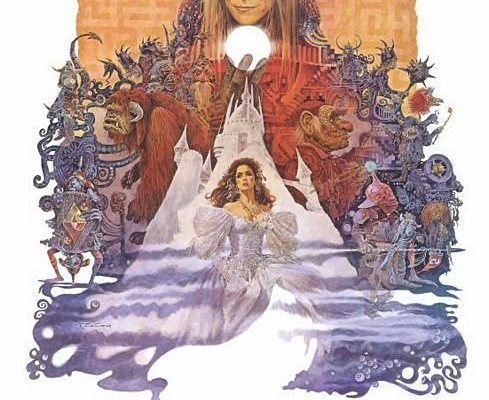 There’s one thing which this review is not going to make, I can assure you of that – which is that I don’t like this movie…. AT ALL!

When I think of 80s fantasy I think of cheesy effects, terrible hair, bad acting and awful story lines, and whilst the Labyrinth is not the worst of these, it is right up with the rest of them! I have seen this film a couple of times with my wife who loves it (for some reason), however I’ve never warmed to it, even as a child, so it’s not even like I have some kind of emotional or nostalgic affinity with it. For me it really is nothing more than a bad film I’ve had to endure more than once!

The acting for a start’s really not great, although of course because he is a natural showman, and there’s a flamboyance which he shared with Jareth, the performance by David Bowie was one of the only redeeming factors of this film.

Don’t get me wrong, for their time the special effects were great and there’s no denying that Jim Henson is one of the god fathers of puppetry and again they were made and controlled with amazing proficiency, stealing the show from the human actors.

But just because it was good then, that doesn’t mean I have to think its good today. We live in an age where we don’t need puppets and where people can apply the kinds of special effects which they achieved using filters on a phone! That might be exaggerating a bit, but not that much! You always hear people say that this is a cult classic. That’s not necessarily a quality badge! What do so many cult classic things have in common? What common factor in fact often makes them cult classics? Especially in the case of tv shows it’s the fact that they got cancelled!

Even down to the story line…. It’s a bit creepy no?

Not only is Jareth an absolute weirdo child abductor – stranger danger of the highest degree! But also he’s after Sarah, who is just a young teenager, so he’s a potential sex pest too!

As I said, this review won’t win me any friends, but if you love the poor acting & effects of 80s fantasy and crave puppets which really do continue to look like puppets, then dive right in to this snooze fest of drug fueled story telling and see where the labyrinth takes you!

Just messing around with the #titan #predator outdoors!
Haven't been on here for a while, so thought I'd come in with one of my favourite dunnys!
Pulled this #blaziken beauty from a #chillingreign #boosterpack the other day. Im still starting my #pokemon journey but loving it and other #tradingcards at the moment. Check out my new #podcast where I briefly touch on my pokemon beginnings whilst also giving you the latest nerd news!
Coming soon a whole new world in mystery boxes. Each retro toy tin comes in a recyclable can filled with toys from the 80s and 90s (actually saved from way back then) including things like #MonstersInMyPocket sealed #TradingCard packs #Lego basic packs from 1990s #McDonalds Happy Meals #Pogs and even some new sweets (so that you can actually enjoy those too) with a #retro vibe!
I'm surprised at how much fun these little #superzings or should I say #superthings actually are. A huge variety of characters and the rare ones are actually really quite nice!
I have just started a new journey on my blog, with a new video following very soon on my YouTube channel. Its a challenge to see if its possible to amass a nice retro toys collection, starting with just £10.
Any other #POGS fans out there... these aren't from the official POGS line but as with so many companies @cocacola made use of this great cheap collectable game to make some awesome looking retro games!
Loving this new #facemask from @collectanddisplay designed by @sket_one - love his work on a bunch of different figures, so a nice way to own some of his work... couldn't resist wearing it - might need to buy another couple to keep - LOVE the design!
How gorgeous is this #gashadokuro 8 inch #dunny by #kidrobot? Absolutely in love with this thing and you can take a closer look on my site. This was never going to be staying in the box!
Got this bad boy for my son... slowly trying to get him in to #starwars and plushies haven't done the trick so this guy is the next step... its actually a really cool figure though! Review on my site in the morning!
Here are my 3 fast food boys! I've never had a Big Boy but its one of my favourite ad icons... if I had to choose a chain I'd have to go for mcdonalds but for pops... I love that colonel!
Finally managed to get my #blacklight #ironman #funkopop under a black light and it looks absolutely incredible right?
Who else uses the @funko pint size heroes display cases for their #pocketpops and #pintsizeheroes - i absolutely love these displays.
Check out this @playmobil #delorean with its lights off in front of a dark #backtothefuture advent calendar diorama... got myself this thing from @tescofood yesterday as a birthday treat for just £25!
I actually quite like this one - can you believe it was the first lego minifig I ever got and I only got it a month ago! Also as I'm not a big DC fan, had no idea who this was - it is of course queen bee!